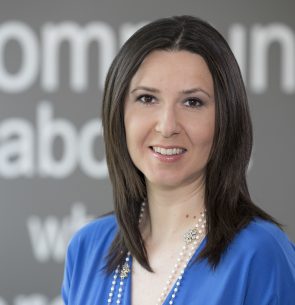 She received her law degree from Aristotle University of Thessaloniki, Greece, and holds a LL.M from the College of Europe, Belgium, on European Legal Studies. Within the framework of ERASMUS Program, she also attended the LL.M program on EU Law of the University of Leuven, Belgium. Antigoni also did a training with the Commission of European Union, Belgium, and had an internship at the European Court of First Instance, Luxembourg, first at the Cabinet of the Belgian Judge, Prof. Koen Lenaerts and then of the Greek Judge, Mr. Michael Vilaras. Prior to joining Microsoft, Antigoni worked as associate lawyer to “Helen M. Papaconstantinou & Associates”, Athens, and then as in-house legal counsel for “Coca-Cola Hellas SA”, Athens, where, among others, supported the local sponsorship activation and the Torch Relay program of “The Coca-Cola Company” for  Athens 2004 Olympic Games.

Afterwards, she moved as in-house counsel to “Papastratos CMC SA”, a Philip Morris International Affiliate, Athens, where she was in charge, among others, of the legal support of sales and marketing departments of the company and member of their management teams. At 2012, Antigoni joined “Microsoft Hellas SA”, Athens, as Legal & Corporate Affairs Director for the Greek entity and in her current role supports the Greek, Cypriot and Maltese business units on a wide range of commercial matters with a special emphasis on Cloud Computing, data protection, IP licensing, antitrust and compliance matters while she is also member of the local Leadership team.

“Cloud for global good” The expansion of technologies such as cloud computing, Internet of Things, Artificial Intelligence and Big Data are reshaping everything in our lives, productivity, innovation, economic growth. These technologies introduce new fields of innovation to the economy and society at large bringing ever closer companies and technology today which is why we […]